admin
Thanks for watching...
The Black Hawk Statue, or The Eternal Indian, is a sculpture by Lorado Taft located in Lowden State Park which is near the city of Oregon, Illinois. The statue is perched over the Rock River on a 77-foot (23.5 m) bluff overlooking the city.
The statue was created by Lorado Taft, beginning in 1908. Taft at first created smaller studies of what would become the statue. The statue itself was dedicated in 1911. Taft noted at the dedication that the statue seemed to have grown out of the ground. It stands on the ground that was once home to the Eagle's Nest Art Colony, which Taft founded in 1898. Though not publicized at the time of construction, original funds were exhausted before the completion of the work and future Illinois Governor Frank Lowden had stepped in to ensure that the statue was completed and erected.
The statue was planned by Taft and several of his students and associates at the Art Colony, which is now part of the Taft Campus of Northern Illinois University and is adjacent to Lowden State Park. An original model of the statue is on permanent display at Discovery Center Museum in Rockford, Illinois. Another model is located at the Oregon Public Library in Oregon, Illinois.
The statue stands 125 feet above the Rock River, though its height only accounts for 48 feet of that. Black Hawk weighs in at 536,770 pounds and is said to be the second largest concrete monolithic statue in the world. It wears a long blanket and stares across the river with folded arms.
With the help of John G. Prasuhn, the young sculptor of the Chicago Art Institute, Lorado Taft created a figure almost 50 feet tall, including a six-foot base. Reinforced with iron rods, the hollow statue is eight inches to three feet thick. The interior is accessible through a door at the base, although visitors are currently not allowed inside the statue. The outer surface composed of cement, pink granite chips and screenings is three inches thick.
At the dedication of the statue on July 1, 1911, Taft said that in the evenings he and members of the Eagle's Nest Art Colony walked along the bluff and would often stop at the statue's location to enjoy the view from the bluff. Contemplation became habitual, arms folded, restful and reverent. Black Hawk came from that contemplative mood and attitude. The 48-foot (15 m) tall monolith, towering over the river, suggests an unconquered spirit through its composition blending Fox, Sauk, Sioux and Mohawk cultures. Taft said the statue was inspired by the Sauk leader Black Hawk, although it is not a likeness of the chief.
On November 5, 2009 the Black Hawk Statue was added to the U.S. National Register of Historic Places. The listing may open up the statue to federal funding for repairs on cracks that naturally appear in its concrete surface.
The statue is in need of restoration as some of the concrete has worn away. Plans have been made by Friends of the Black Hawk Statue Committee to begin restoration work in Spring 2014. Although delayed, resumed physical integrity tests and restoration restarted in Summer 2015.Current efforts to restore the statue have been halted due to a dispute between the project manager and an engineer working on the statue.
Source:
Music: Cry,Vibe Tracks; YouTube Audio Library 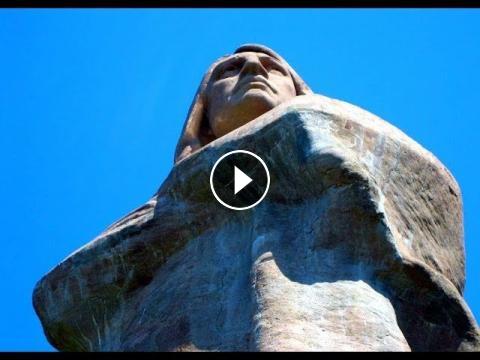 Thanks for watching...The Black Hawk Statue, or The Eternal Indian, is a sculpture by Lorado Taft located in Lowden State Park which is near the city ...