admin
This video takes you to the press preview of American artist Chris Burden's current solo exhibition at The New Museum in New York. The exhibition titled Extreme Measures is Burden's first major exhibition in the US in over twenty-five years. The survey exhibition spans a forty-year career and is focused on weights and measures, and boundaries and constraints - both physical and moral. The show occupies all five floors of the museum and also features an installation on the exterior of the SANAA-designed museum. Among the works on view are A Tale of Two Cities (1981), All the Submarines of the United States of America (1987), L.A.P.D. Uniforms (1993), 1 Ton Crane Truck (2009), Three Arch Dry Stack Bridge (2013), and Porsche with Meteorite (2013), a restored 1974 Porsche 914, held in equilibrium by a 390 pound meteorite.

Chris Burden: Extreme Measures runs until January 12, 2014. The installation The Big Wheel (1979) on the Fourth Floor will be activated at 11:30 a.m. and 2:30 p.m. Wednesday through Sunday. The Big Wheel is a kinetic sculpture in which the revving of a 1968 Benelli motorcycle sets a massive iron wheel in motion.

Chris Burden (b. 1946 Boston, MA) attended Pomona College and received his MFA from the University of California in 1971. He had a retrospective exhibition (organized by Paul Schimmel) at the Newport Harbor Art Museum, Newport Beach, CA, in 1988 and at MAK-Austrian Museum of Applied Arts, Vienna, in 1996. His work was presented in the 48th Venice Biennale and at the Tate Gallery in 1999. In 2008, the Public Art Fund presented WHAT MY DAD GAVE ME, one of his skyscraper sculptures, at Rockefeller Center in New York City. 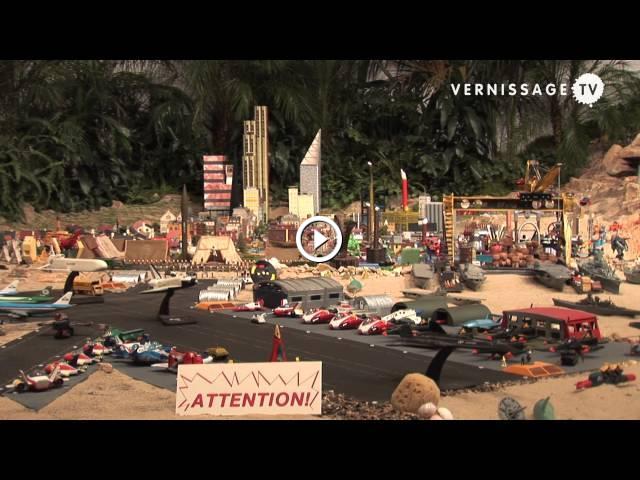 This video takes you to the press preview of American artist Chris Burden's current solo exhibition at The New Museum in New York. The exhibition titl...