admin
Official Website: pbs.org/gijews | #GIJewsPBS
The first German city to fall to American forces in World War II was Aachen. There, a service was held by Jewish GIs that was broadcast in Germany and around the world by the National Broadcasting Company. Max Fuchs, an infantryman, volunteered to sing as the cantor, and he recalls his experience that day as they gathered to remember the fallen.
Subscribe to the PBS channel for more clips:
Enjoy full episodes of your favorite PBS programs at pbs.org/video.
Like PBS on Facebook:
Follow PBS on Twitter:
Follow PBS on Instagram:
Official website:
Get PBS merchandise:
The documentary GI JEWS: Jewish Americans in World War II is the profound and remarkable story of the 550,000 Jewish Americans who served their country in World War II. These brave men and women fought for their nation and for Jewish people worldwide. Like all Americans, they fought against fascism, but they also waged a more personal fight - to save their brethren in Europe. Jewish servicemen were also among the first to assist the survivors of the Nazi concentration camps liberated by American troops. After years of struggle, these soldiers emerged transformed, more powerfully American and more deeply Jewish, determined to continue the fight for equality and tolerance at home. 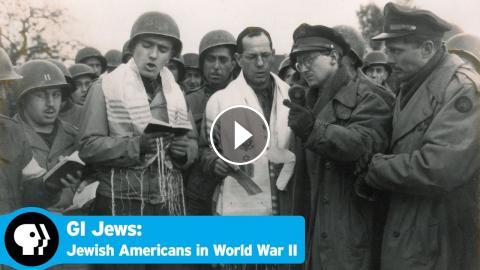 Official Website: pbs.org/gijews | #GIJewsPBSThe first German city to fall to American forces in World War II was Aachen. There, a service was held by...