admin
Take a look back at one of the most legendary moments of the Volcom Fiju Pro in 2012. Call it magic, call it fate -- every single year, the Volcom Pipe Pro serves up Pipeline at its finest. Sure, it's that time of the year (last week of Jan into first week of Feb), so the swell is pretty much guaranteed, but it's those finals that seem to be absolutely flawless.

That was one for the books. 8-10ft-plus perfect, offshore Pipe starring John John Florence, Jamie O'Brien, Kai Barger and Nate Yeomans in a four-man cage match.

And while John and J.O.B. had been pretty much owning every heat they'd been in, easily cruising into the final, it wasn't just their two-man show. Why, every guy in that 35 minutes of glory was getting bombs and in fact, Maui's Kai Barger even had the heat won for a part of it.

That is until Jamie built a sturdy house of scores with impeccable pigdogging-to-no-hands backside tuberiding, inching ahead of the pack with only a couple minutes left. Indeed it looked near-impossible for the other three warriors, John John included, to beat him. Jamie also was sticking to John like white on rice, also an extremely tactical defensive move...Until John jetted toward Pupukea.

Stroking toward a wide and North Backdoor bowl coming in 20 yards to John and Jamie's right, (with less than 10 seconds left in the heat!) John scratched ahead, as Jamie kicked to catch up. The crowd was going berserk. The commentators were losing it.

And 19 year old John John Florence was just a little too deep for JOB to stop him, so for maximum depth, on a solid 8 foot drainer, John faded left like he was going Pipe, then turned right, slip-sliding into the Backdoor cave, inches from a deadly, falling lip.

Then disappearing. Then spat out. Then claiming. Then winning the event in the clutchiest of situations. His second of (soon to be) three Volcom Pipe Pro wins in a row.

Experience the world of Red Bull like you have never seen it before. With the best action sports clips on the web and YouTube exclusive series, prepare for your "stoke factor" to be at an all time high.

See into our world:

Get a FREE SUBSCRIPTION to our magazine here (US only): 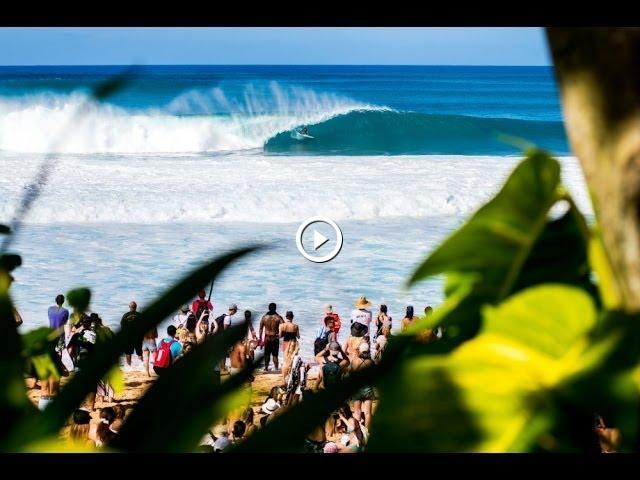 Take a look back at one of the most legendary moments of the Volcom Fiju Pro in 2012. Call it magic, call it fate -- every single year, the Volcom Pip...