ava
Gaza is a war-zone - surrounded by Israel and controlled by Hamas. The works of an Armenian photographer taken in the 1940s and the 1960s show a Gaza that is little known today.

"Photo Kegham" was known all over Gaza. As one of the territory's first phtographers, the Armenian Kegham Djeghalian opened a photo studio in Gaza City at the end of the 1940s. His images, taken between 1945 and 1970, show a little-known face of Gaza. One image is of Che Guevara, who visited the area in 1959. Another is of a railway station along the line between the Gaza Strip and Egypt which no longer exists today.

Marwan Tarazi, whose family took over the business in the 1980s, was able to preserve a part of Djeghalian's archive, even though Studio Kegham is closed now. Archiving the photos has been anything but simple. Most of the negatives and prints are in boxes and plastic bags in a cupboard. Says Tarazi, "It's these negatives and prints that are what's so important to me. They're our legacy, our culture."

For more than twelve years, Israel, and in some cases Egypt, have tightly cordoned off Hamas-controlled Gaza. Travel and business are almost impossible for the area's two million residents. Three wars and many bursts of military conflict between Hamas and Israel have dominated recent years.

Photographer Shareef Sarhan is documenting the conflict today, but he also tries to present daily life. Says Sarhan, "Most people know the Gaza they see in the media - destruction, war, destruction. Blockades and occupation. Yet beyond that, there's another Gaza."

The young rapper Rapper Ayman Mghamis uses old photographs in his videos as he tells of life today in Gaza. He says this past is long gone, adding that Gaza today cannot offer its young residents any opportunities. He says, "I can't plan my life in Gaza. I don't know what will happen tomorrow. Will I still be alive? Will there be a war? I can't see a horizon."

Anahid Boutin is Kegham Djeghalian's eldest daughter. She lives in France and remembers her childhood in Gaza in the 1950s and 1960s, when the place was under Egyptian military administration. She says, "What are my memories of Gaza? They were happy times. As Armenians, we were very welcome in Gaza." Although Boutin has been unable to visit for many years, she still maintains contact with her friends from that time. The photographs connect different generations and places. "It would be good to preserve the history,” she says. "At least the history we know. These photographs reflect a part of Gaza's turbulent, emotional history." 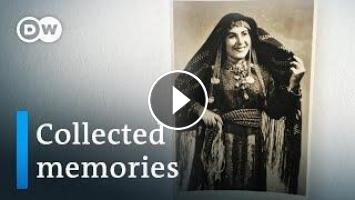 Gaza is a war-zone - surrounded by Israel and controlled by Hamas. The works of an Armenian photographer taken in the 1940s and the 1960s show a Gaza ...