WCS researchers who have collected a wealth of information on sharks in New York waters over the past four years through the use of acoustic tags, devices that enable scientists to remotely track marine animals as they swim through their environment. These data have helped the scientists confirm the existence of the nursery in Great South Bay, one of the rich estuaries found along Long Island’s southern shore. Only a handful of sand tiger shark nursery grounds have been identified, one of which is in the waters of Massachusetts.
Data gathered from the sharks’ movements are helping scientists learn more about the migratory behavior of sand tiger sharks and their habitat needs. The discovery of the Great South Bay shark nursery in particular is important because the sand tiger shark has been heavily depleted by fishing and is listed as a “Species of Concern” by the U.S. National Marine Fisheries Service. Fishing for sand tiger sharks has been prohibited in state and federal waters since 1997. The species has a low reproductive rate—a female shark gives birth to only one or two pups every two years—so it will take this sand tiger shark population many years to rebuild. Protecting the nursery will help promote sand tiger shark recovery in the coastal waters of the eastern United States.

WCS (Wildlife Conservation Society) MISSION: WCS saves wildlife and wild places worldwide through science, conservation action, education, and inspiring people to value nature. To achieve our mission, WCS, based at the Bronx Zoo, harnesses the power of its Global Conservation Program in nearly 60 nations and in all the world’s oceans and its five wildlife parks in New York City, visited by 4 million people annually. WCS combines its expertise in the field, zoos, and aquarium to achieve its conservation mission. 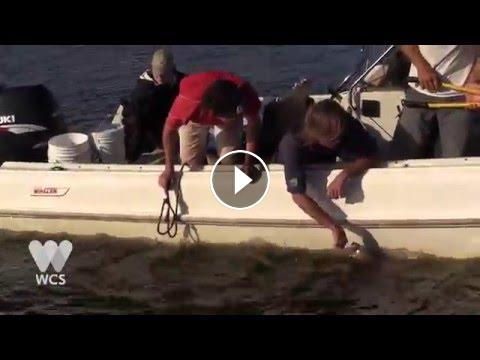 WCS researchers who have collected a wealth of information on sharks in New York waters over the past four years through the use of acoustic tags, dev...