Conservationists from WCS, Tanzania National Parks Authority (TANAPA), and Tanzania Wildlife Research Institute (TAWIRI), released an incredible video today showing the successful re-introduction of 24 zebras into Tanzania’s Kitulo National Park in the Southern Highlands region last week – part of a bold effort to re-wild this once pristine landscape.
Half a century ago zebras were hunted to extinction or otherwise removed from this region for state-run sheep ranching and dairy farming which have since been abandoned.
The zebras – which included 16 adult/subadult females, six adult/subadult males, and two juvenile males were translocated from Mikumi National Park some 700 kilometers (434 miles) in eastern Tanzania. Four of the animals have been equipped with satellite collars so conservationists can track their movements in real time.
Said Tim Davenport, Director of WCS Tanzania Program, who first conceived the re-wilding project in the early 2000s: “It was thrilling to see the zebras moving across the plateau as they had for untold centuries. This collaboration proves that we can restore wildlife in once degraded landscapes – provided there is political will and good science behind these efforts.” 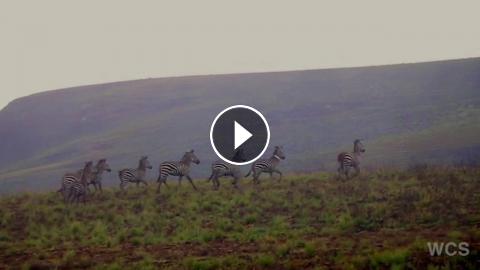