ava
It is 10 years since the Arab Spring shook the Arab world. In Egypt too, tens of thousands of women and men took to the streets to protest against the Mubarak regime, hoping to bring about political change.

Yet shortly after the fall of Hosni Mubarak, women participating in public protests became targets of sexual and physical violence.

Hend Nafea, Khadiga Hennawi and Mariam Kirollos refused to put up with it. The three women have campaigned tirelessly for the objectives of the Arab uprisings to include women, and to ensure that the slogan of "Bread, freedom and social justice for all" chanted on the mass protests really applies. They are willing to risk everything to pursue their vision.

Hend Nafea’s story is at the heart of the film. Having developed from a college activist to a central protest figure, she was sexually abused by the military and is determined to seek justice in court. Despite criticism from her conservative family and obstructive red tape, she remains resolute in her vision of freedom. "A nation without torture is a dream that can become true", she says.

‘Days of Wrath’ offers a razor-sharp insight into the disturbing and troubled history of Egypt after the Arab Spring, the human rights violations rife in the country and the brave women fighting for justice and freedom in spite of all efforts to silence them. 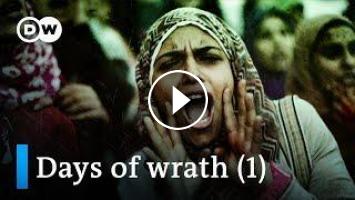 It is 10 years since the Arab Spring shook the Arab world. In Egypt too, tens of thousands of women and men took to the streets to protest against the...