ava
Libyan refugee camps are hell on earth for many. That’s why people often accept deadly risks and attempt to cross the approximately 500 kilometers of Mediterranean Sea between Libya and Sicily - on overcrowded boats with little to protect them.

The refugee route across the Mediterranean has become a mass grave, as more and more migrants risk their lives by attempting to reach Europe. The charities "SOS MEDITERRANEE" and "Médecins Sans Frontières" have chartered the "Ocean Viking" - a rescue ship that has been cruising the Mediterranean since the end of 2019. Journalists Etienne Huver and Jean-Baptiste Renaud accompanied the ship on its mission. The crew has the task of rescuing as many people as possible from the water. They are always on the lookout for small boats that are unsuitable for the long journey to Europe. The results are dramatic images of rescue operations at sea, as well as the stories of refugees, most of whom have set out from Libya. There, refugees are often crammed into camps in inhumane conditions. There are instances of rape by police, as well as beatings and torture. The camera team gained access to one of these camps. Despite being shown the camp’s positive side by the man who runs it, the team also used a hidden camera to film in unauthorized areas.

The documentary depicts the inhumanity of Libya’s refugee camps and the fates of those who try to escape, as well as the efforts of "Ocean Viking” crew members to save lives. 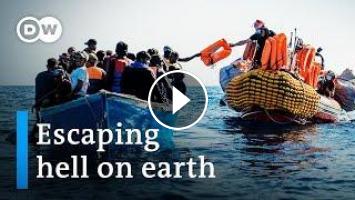 Libyan refugee camps are hell on earth for many. That’s why people often accept deadly risks and attempt to cross the approximately 500 kilometers of ...