Renan Koen 'Before Sleep' - Ullmann / Piano Sonata No.7 I. Allegro

admin
Renan Koen’s 3.Album Project
Holocaust Remembrance “Before Sleep”
Renan Koen’s third album project Holocaust Remembrance “Before Sleep” released by Kalan Müzik will be available at music shops both in cd and dvd format on November 24th 2015.
The Camp Composers
“Before Sleep” is the product of many years of detailed research conducted by Renan Koen on the lives of Pavel Haas, Gideon Klein, Zikmund Schul and Viktor Ullmann, 4 composers who were imprisoned in the Terezin Concentration Camp during the Second World War and who died there or in the Auschwitz Concentration Camp. The album is composed of piano and choral works composed by these four composers before and during their imprisonment.
Turkey Premieres
The Turkey premieres of the piano and choral works of these 4 composers were performed on April 12th 2015 at Zorlu Performance Arts Center Drama Stage, later to be documented for future generations in the body of the “Before Sleep” album project. The concert took place thanks to the contributions of the Quincentennial Foundation, Municipality of Şişli and Anadolu Kültür. In this concert, Renan Koen, who is also the researcher and creator of this project, played the piano works. Choral works were performed by Nazım Hikmet Academy Chorus under the direction of Erdem Nusret Karakaş.
A Document for Future Generations
The works selected by Renan Koen were recorded in Babajim Recording and Mastering Studio. All of these works testify to the extremely difficult circumstances they were composed in and the composers’ strong will and discipline which is in part related to the strong musical education they received during their childhood. What stands out in these works is the idea that the composers relentlessly kept creating despite all these difficulties with extreme determination and what Koen calls “positive resistance”. In the DVD, there are extracts from the concert where Koen also talks about her project “Before Sleep”, interviews both with people who lived the horrors of World War 2 and their descendants; alongside interviews with Dr. Gottfried Wagner and Osman Kavala. A musical analysis of the works, especially those on Viktor Ullmann and Gideon Klein’s piano sonatas, can also be found in the DVD. The musical analyses, the life stories of the composers when they were in the camp are carefully documented to pass this heritage to future generations down to the tiniest detail.
‘ascension’ “in memory of the Heroes of the Holocaust”
The “ascension”, a work which Koen composed for viola and piano and collaborated with Ulrich Mertin in the album, is the final track and has been dedicated to the memory of “the Heroes of the Holocaust”.
A Lasting Work of Art
Thanks to the support of the Quincentennial Foundation,
Anadolu Kültür, Kariyo&Ababay Foundation and Dr. Erol Hakanoğlu,
the “Holocaust Remembrance “Before Sleep” project, in addition to the cd and the dvd, has an additional booklet, with the biographies of the 4 composers, program notes and Renan Koen’s analyses of their works in four different languages including Turkish, German, French and English, which allows music-lovers and researchers from all over the world to appreciate the project better.
www.renankoen.com
www.kalan.com

Renan Koen 'Before Sleep' - Ullmann / Piano Sonata No.7 I. Allegro 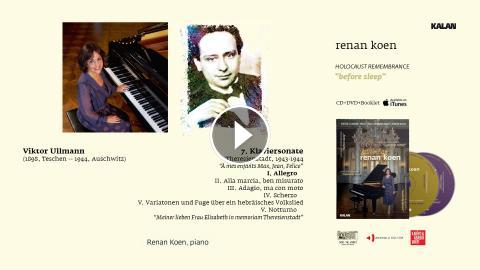