admin
iTunes:
2. Una Matika de Ruda, İzmir / Smyrna
soprano, duduk ve piyano için / para soprano, duduk i piano
/ for soprano, duduk and piano
Renan Koen
piyano / piano
soprano
kompozisyonlar / kompozisyones / compositions
Ertan Tekin
duduk
RENAN KOEN’S ALBUM
Lost Traces Hidden Memories
Pianist, composer, soprano and music therapist Renan Koen’s album “Lost traces, hidden memories”, which is based on her family history, has been released by Kalan Music.
Along her family’s history, Koen departs from Spain and journeys to Greece, Anatolia, Egypt and Middle East. She chose Sephardic songs of these regions and recomposed them for various chamber music orchestras.
The Ladino / Judeo-Espanyol language – which is based on the Spanish of the 15th century and was spoken by the Jews living in the Ottoman Empire – and its presence in this marvelous journey, has inspired the composer significantly.
Ladino/ Judeo-Espanyol, as a language, is a synthesis that is formed by 15th century Spanish and the cultural components of the places it was spoken. This cultural heritage unites with Koen’s successful musical formation and these songs today, prepare for brand new journeys.
If you want to listen to a real fairy tale that is soft and touching, yet time to time breath-taking and intriguing with musical surprises, you should lend your ears to the songs on this album.
Some of the valuable musicians that worked in this album are: Sasha Rozhdestvensky (violin), Elif Kantarcı (viola), Sedef Erçetin (cello), Ertan Tekin (duduk), Derya Türkan (kemancha), Özer Özel (tambur), Mehmet Akatay (percussion), Kemal Akdoğan (tenor) and Şimon Asayas (chazzan)
This album has been put into realization with the valuable contributions of Martin Elias ve Koluman A.Ş. and produced by Reuben de Lautour. It was recorded in the Istanbul Italian Synagague and Babajim Recording Studio.
One of the surprises of Koen is that, she brought the 200 years-old harmonium to light that was standing idle in the synagogue.
www.renankoen.com - www.kalan.com
iTunes Amazon Spotify Deezer 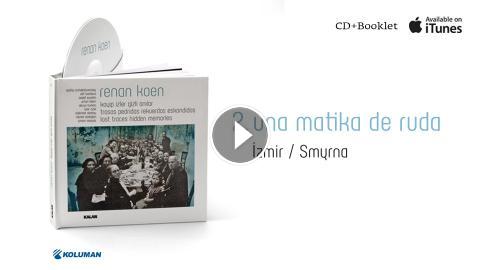