Scotland: Is the desire for independence growing? | DW Documentary

ava
Britain is in the throes of a serious economic crisis and many Scots are wondering if things wouldn’t be better if their country was independent. Although it lost a referendum on independence back in 2014, the Scottish government still wants out.

Many Scottish voters support Scotland’s nationalist First Minister, Nicola Sturgeon, including musician Neil Mackay. A long time supporter of independence, Mackay organizes large-scale demonstrations, where thousands of people protest in favor of leaving the UK. Rising energy and food prices are hitting people hard, the length and breadth of the country . One of them is single mother Sandra MacPherson. Like many others, she has been on a very tight budget this winter. Advocates of Scottish independence blame Westminster for their plight, whereas opponents blame the Scottish government. First Minister Nicola Sturgeon and her party, the SNP, have long made it clear they favor a fresh referendum; but in November 2022, the UK Supreme Court ruled that a new referendum may only take place with British government approval. As with Brexit, the issue of independence is proving a divisive one.

Scotland: Is the desire for independence growing? | DW Documentary 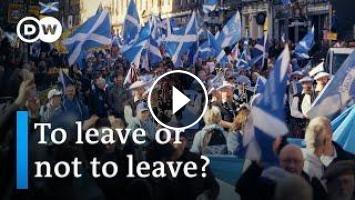 Britain is in the throes of a serious economic crisis and many Scots are wondering if things wouldn’t be better if their country was independent. Alth...