This Piece Means Nothing: Andrew Stein-Zeller and Aaron Davis at TEDxConnecticutCollege 2014

admin
Andy Stein-Zeller '14 is a composer, guitarist, and classical music enthusiast. He is completing a B.A. with a major in Music and Technology and a minor in Computer Science. Andy is a proud member of the Connecticut College New Music and Percussion Ensemble, with whom he has been a featured soloist on works by Frederic Rzewski and George Crumb. He is giving a senior recital next week, which will feature staples of the classical guitar repertoire and Music department faculty players performing his own compositions. At Conn, Andy has studied contemporary music, composition, and conducting with Arthur Kreiger and Peter Jarvis.

Andy is a passionate advocate of all types of Art Music, and takes no greater delight in his aims to revive an interest in both Classical and Contemporary Classical music amongst his peers. After graduation, he will go to work with [email protected], Silicon Valley's premiere Chamber Music Festival and Institute, with whom he intends to begin his career as an aspiring Artistic Administrator.

Aaron Samuel Davis -- Aaron began dancing at the age of 14 at The Williams School in New London, CT under the tutelage of Barbara 'Bo' Parish. Aaron studied for a period of time at Eastern CT Ballet with Libby Nye and Cristin Cawley. During his senior year of high school, Aaron earned a scholarship through the New London Scholars program that allowed him access to a tuition-free class at Conn. Since his enrollment at Connecticut College in the fall of 2010, Aaron has had the privilege of performing in the works of Shani Collins Achille, Lisa Race, David Dorfman, Adele Myers, Faye Driscoll, Paul Matteson and Nicholas Leichter. While studying Dance and Classics at Conn, Aaron has had the opportunity to wander intellectually and collaborate with faculty and peers; all while staying in his hometown! Aaron believes that now after 10 years of his education associated with this beautiful campus and 21 years of his life associated with New London, it is now time to wander away from his almae matres and embrace his destiny near and far.

This Piece Means Nothing: Andrew Stein-Zeller and Aaron Davis at TEDxConnecticutCollege 2014 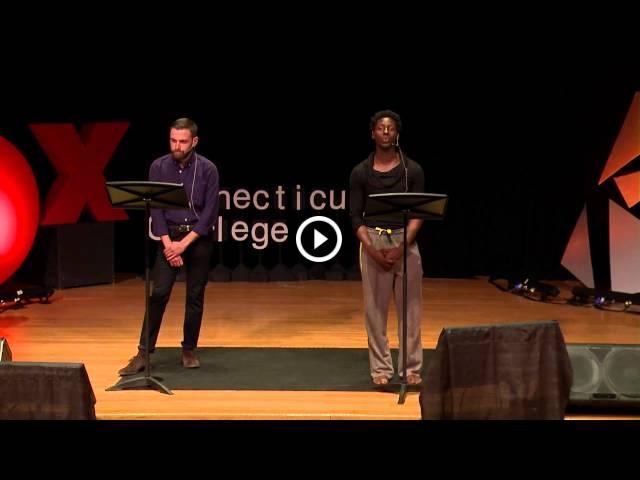 Andy Stein-Zeller '14 is a composer, guitarist, and classical music enthusiast. He is completing a B.A. with a major in Music and Technology and a min...