After the Acquittal | Inside America with Ghida Fakhry

57 Senators in total — 48 Democrats, two Independents, and seven Republicans found Trump guilty, while 43 Republican senators found him not guilty of inciting the January 6th insurrection. While this was the most bipartisan vote in any US President’s impeachment trial, 10 additional guilty votes were needed for a conviction. A poll released this week showed that 58 percent of Americans believe Trump should have been convicted.
Trump’s acquittal has further factionalized the Republican Party, as the seven Republican senators who crossed party lines to convict, face censure and rebuke from their State GOP leaderships.

Meanwhile, the Democrats and House Managers who argued the case to convict Trump but failed to secure what would have been a first in US history, have come under sharp criticism for their decision to forgo witness testimony after a majority of senators voted to grant that last minute request. Many argue that the live testimony of a Republican congresswoman, Representative Herrera Beutler, who was willing to testify about a desperate call for help made by Republican House leader Kevin McCarthy to President Trump while the Capitol being overtaken by insurrectionists, would have been damning and could have made it more difficult for some Republican senators to acquit.

So what impact will Trump’s acquittal have on Republicans and Democrats alike?

Guest:
Bennie Thompson
US Representative from Mississippi (D) and Chairman of the Homeland Security Committee

After the Acquittal | Inside America with Ghida Fakhry 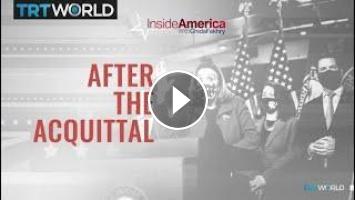