CHEETAH SOUNDS | Listen to the Sound of Cheetahs with Real Videos

In this Kiddopedia Animals video, you will listen to cheetah sound effects. The purpose of this video is to teach you the sounds and the noises cheetahs make.

Cheetahs produce a variety of sounds including growls, purrs that generally denote contentment, chirps (between a mother and her cubs), and an "explosive yelp" heard by humans from 2 km away. One big cat that purrs but can't roar is the cheetah. Biologists place it in a genus all its own (Acinonyx), simply because it can't retract its claws completely. Also unique to the cheetah is a high- pitched chirp, said to resemble a bird. Angry sound of a cheetah is probably different than you expected.

A cheetah (Acinonyx jubatus) is a medium large cat which lives in Africa. It is the fastest land animal and can run up to 112 kilometers per hour for a short time. Most cheetahs live in the savannas of Africa. There are a few in Asia. Cheetahs are active during the day, and hunt in the early morning or late evening.

Kiddopedia channel is the right place to find educational videos about animals, objects and English vocabulary. If you love animals, subscribe to our channel for more animal videos and animal sounds.

CHEETAH SOUNDS | Listen to the Sound of Cheetahs with Real Videos 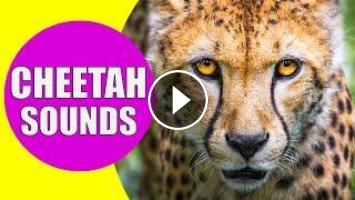 What sound does a cheetah make? Let's listen to different cheetah chirping, yelping, purring and growling sounds and sound effects. Subscribe to Kiddo...