ava
What does the Nightingale Bird song sound like? Let's listen to different species of nightingales singing sounds and bird calls. Subscribe to Kiddopedia channel for more animal and bird videos → https://kiddopedia.page.link/sub

In this Kiddopedia birds video, you will listen to Common Nightingale, Thrush Nightingale and orange-billed nightingale sounds. The purpose of this video is to teach you the the nightingale bird singing sounds and bird calls.

Common nightingales are so named because they frequently sing at night as well as during the day. The name has been used for more than 1,000 years, being highly recognizable even in its Old English form nihtegale, which means "night songstress". The song is loud, with an impressive range of whistles, trills and gurgles. Its song is particularly noticeable at night because few other birds are singing. This is why its name includes "night" in several languages. Only unpaired males sing regularly at night, and nocturnal song probably serves to attract a mate. Singing at dawn, during the hour before sunrise, is assumed to be important in defending the bird's territory. Nightingales sing even more loudly in urban or near-urban environments, in order to overcome the background noise.

The common nightingale, rufous nightingale or simply nightingale (Luscinia megarhynchos), is a small passerine bird best known for its powerful and beautiful song. "Nightingale" is derived from "night" and the Old English galan, "to sing". The genus name Luscinia is Latin for "nightingale" and megarhynchos is from Ancient Greek megas, "great" and rhunkhos "bill".

The thrush nightingale (Luscinia luscinia), also known as the sprosser, is a small passerine bird. The thrush nightingale is similar in size to the European robin. It is plain greyish-brown above and white and greyish-brown below. Its greyer tones, giving a cloudy appearance to the underside, and lack of the common nightingale's obvious rufous tail side patches are the clearest plumage differences from that species.

Kiddopedia channel is the right place to find educational videos about birds, animals, objects and English vocabulary. If you love birds and animals, subscribe to our channel for more animal videos and bird sounds. 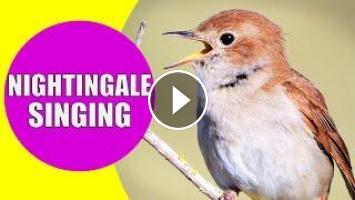 What does the Nightingale Bird song sound like? Let's listen to different species of nightingales singing sounds and bird calls. Subscribe to Kiddoped...