admin
Natural Born Hustlers airs Wednesday, January 13, 20 & 27, 2016 at 8 p.m. (ET) on PBS (check local listings).
When it comes to the most important goals in the animal kingdom, learning how to survive and raising the next generation are right at the top of the list. This may seem clear cut, but the lengths to which some animals go to achieve these objectives can often be downright devious. To illustrate the point, we see a shady squirrel, double-crossing cuttlefish, a conniving orchid mantis and a deceitful bird called a drongo use mimicry, disguise, and trickery to get what they want. Throughout the episodes, scientists studying animal con artists pull back the curtain on their deceptions, using their latest research to demonstrate how each of them hustles their mark. This three-part series reveals the modus operandi of some of nature’s greatest animal con artists as they outwit predators, line up their next meal, and get the girl.
The duplicitous ways in which animals try to secure their next meal is the subject of the second episode, The Hunger Hustle. Singled out is the devious drongo, a South African bird. In winter, he has to rely on grubs and insects that live underground, but other animals are far better equipped to dig them up, so the drongo devises a con. He serves as lookout while vulnerable social weaver birds are on the ground digging up food. If a predator is spotted, he sends out an alarm call and the weavers head for safety until they get an all clear call from him. But the drongo also issues fake alarm calls, allowing him to eat food the weavers have dug up before issuing an all clear to return. Among other segments: the orchid mantis, which attracts insects by mimicking a flower and why it is even more successful than the real thing; how killer whales use sound to manipulate the behavior of herring to their advantage; and how and why gray squirrels practice sleight of hand to protect the nuts they’ve gathered to get them through the winter. 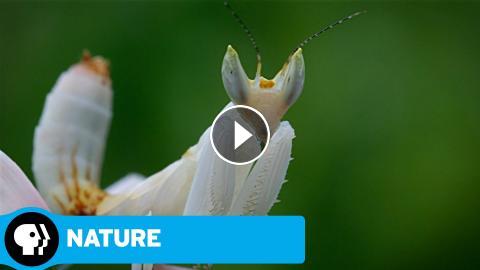