Sabotaging the Election | Inside America with Ghida Fakhry

ava
As President Trump continues to dispute election results, his legal team has failed to provide sufficient evidence of widespread voter fraud and suffered a series of defeats in court.

After Joe Biden’s late but decisive electoral college win, with projected victories in Georgia, Arizona and several battleground states Trump won in 2016, the president has accused Democrats of ‘trying to steal’ the election.

While Trump repeated his claims that the election was ‘rigged’ in a series of tweets, thou-sands of his followers gathered in Washington DC in a strong show of support for the President, whose refusal to concede has alarmed Democrats on Capitol Hill. Most Republican law-makers continue to support Trump’s legal claims, with only a few Senators congratulating President-elect Biden, who continues to be denied access to intelligence briefings provided to all presidents-elect.

With nearly all of Trump’s legal challenges have been defeated in court, and the December 8th deadline for resolving all legal disputes fast approaching, some of the president’s allies are suggesting that Republican lawmakers should ignore the popular vote in states won by Biden and hand their electoral college votes to Trump instead. The constitution gives state legislatures the power to determine the ‘manner’ in which electors are appointed to the Electoral College, which is made up of 538 people who will meet on December 14th in each state to formally elect the president. More than 30 states have laws that specify that the winner of the statewide popular vote should be entitled to the state’s presidential electors.

So, can Republican state legislatures pick electors to vote for Trump or is this a far-fetched scenario?

Sabotaging the Election | Inside America with Ghida Fakhry 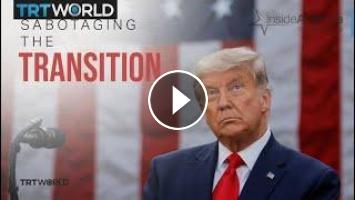 As President Trump continues to dispute election results, his legal team has failed to provide sufficient evidence of widespread voter fraud and suffe...