Domestic Terrorism in the US | Inside America with Ghida Fakhry

ava
Republican leaders are objecting to House Speaker Nancy Pelosi’s draft mandate of a commission to look into the January 6 insurrection on Capitol Hill.
Republican Senate minority leader Mitch McConnell called Pelosi’s idea of setting up a 9-11 style commission “partisan by design” and said the commission should be equally composed of Democrats and Republicans. Pelosi’s plan provides for 7 Democratic and 4 Republican Commissioners. McConnell also argued that in looking at violent extremism, the Commission should examine "the full scope of the political violence problem in this country” —a thinly-veiled reference to the nationwide Black Lives Matter protests last summer.
So far, over 280 people have been arrested and charged in connection with the failed insurrection.
Meanwhile, as 5000 National Guards remain deployed around the Capitol to ward off possible violence on March 4th, the newly-confirmed Attorney General, Merrick Garland, told the Senate Judiciary Committee, that he will do “everything in the power of the Justice Department” to stop domestic violent extremism. He added that the Jan 6 events were linked to a movement that poses an existential threat to the United States.

Guests:
Ilhan Omar
US Representative from Minnesota (D), Whip of the Congressional Progressive Caucus and Vice Chair of the House Foreign Affairs subcommittee on Africa.

Michael Jensen
Senior Researcher at the National Consortium for the Study of Terrorism and Responses to Terrorism (START) at the University of Maryland.

Domestic Terrorism in the US | Inside America with Ghida Fakhry 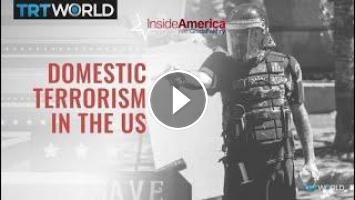 Republican leaders are objecting to House Speaker Nancy Pelosi’s draft mandate of a commission to look into the January 6 insurrection on Capitol Hill...