ava
Turkish Trileche - Trileçe Cake is famous milk cake with caramel sauce very popular nowadays in Turkish Cafes in Turkey. It is a different version of Tres Leches cake.
In common recipe it uses condensed milk and evaporated milk. In Turkey we use milk cream packs for that in the syrup. But in this recipe i used homemade cream which makes it healthier and lighter with the same irresistible taste.
To make Turkish Trileche you will need:
For the sponge cake:
4 eggs (yolks and whites seperated and at room temperature)
3/4 cup sugar
pinch of salt
4 tbsp water
1 tbsp vegetable oil
1 cup plus 2 tbsp flour
1 pack baking powder (2 tsp)
1 pack vanilla (2 tsp) or vanilla extract
baking paper
For the milk syrup:
3+1/2 to 4 cups whole milk
1 full tbsp fresh kaymak cream - It is cream that i collected from top of boiled and refrigerated fresh farm milk. I will share a video about it. You can use 200ml heavy cream instead of it.
half cup sugar
For The Caramel Sauce:
1/2 cup sugar
1 heaped tbsp butter
200ml heavy cream or 1 tbsp kaymak cream filled with whole milk to 200ml.
whipped cream topping as your choice
In Turkey we use krem shanti powder whipped with cold milk
How tres leches was invented
While recipes vary from place to place, tres leches is essentially a sponge cake soaked in a milk mixture and topped with whipped cream or meringue. The three milks in question are evaporated milk, condensed milk, and whole milk or heavy cream. It may sound like an odd dessert choice to the uninitiated, but the cake is absurdly popular in Latin America.
Plenty of countries claim to have invented tres leches, but Mexico has the strongest claim to the original recipe. Nineteenth-century recipes exist for antes, or sherry soaked cakes with custard, fruit, and nuts, in the Mexican states of Sinaloa and Oaxaca. It’s not hard to connect the dots from these antes to the tradition of soaked cakes in Europe. Dishes such as English trifles, Italian zuppa inglese, or Portuguese sopa dourada had been around for centuries prior, so it is likely that antes were a new world iteration of an old-world favorite.
The cake tradition transitioned to what would be recognized as tres leches with the invention of canned milk. Canned milk — which is made by removing about 60 percent of the water content — was first developed in the mid-19th century and gained widespread use as a military field ration since it was easily transported and had a long shelf life. Canned milks were so popular for military use that during the World Wars, many companies such as Nestlé — which had been canning milk since the mid-1800s — had a hard time keeping up with demand. War caused obvious distribution problems throughout Europe and Asia, so Nestlé expanded production into Latin America where business flourished. Around this time, perhaps to boost sales in the local market, Nestlé began printing recipes for tres leches cake to go on their cans. And so the Mexican recipe with its roots in old-world Europe found its way onto market shelves throughout Latin America.
Nowadays, tres leches is the standard celebration cake for much of Central America. Its popularity has also moved northward as it’s long been a staple of trendy taquerias in Austin and a familiar item on restaurant menus in Miami. In 2003, Häagen-Dazs and Blue Bell even debuted a tres-leches-flavored ice cream. But the surging popularity of a Latin American dish is not so surprising in the United States, which shares a nearly 2,000-mile border with Mexico and has more than 47 million Latinx citizens. What’s more surprising is the latest nation to catch the tres leches fever: Turkey.
Read more:
For more Turkish Cuisine recipes don't forget to subscribe and press the notification button:
Follow me from on social media and website
INSTAGRAM: www.instagram.com/turkishfoodrecipes_
Facebook: 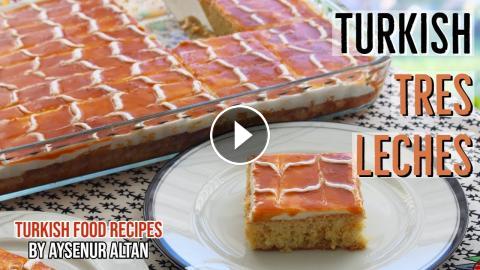 Turkish Trileche - Trileçe Cake is famous milk cake with caramel sauce very popular nowadays in Turkish Cafes in Turkey. It is a different version of ...